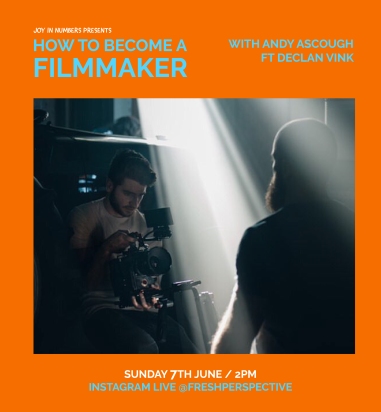 Due to the high volume of interest in those wanting to get involved, this week we hosted 2 live sessions on Instagram! The first one involved Ava Grace returning, upon the audiences request, the host a more practical songwriting workshop. Again, she and Declan were brilliant hosts – both of them were informative and engaging, creating a safe space for the audience to experiment with different songwriting styles and techniques.

The second live session was on film making, delivered by Andy Asco. Luckily Declan from FP was already familiar with Andy Asco and managed to get him in. As he is already such a successful film maker, travelling between Ireland and LA, having the chance to allow our audience to engage with him directly was a fantastic opportunity. Seeing as film making isn’t necessarily something you can showcase within an hour, we set it up as a live Q&A session, similar to last week, to give the audience to ask direct questions and gather the information they wanted from Andy.

Although both the live session seemed relatively successful, looking back I feel like that would of done better if we stuck to the initial routine of hosting just one live a week rather than trying to cram two into one week. There simply wasn’t enough time to market them both, and even if there were it’s a big ask to try and get people to give 2 hours of their time in the same week. Even if it is beneficial to them.

In the background, I’ve also been reaching out to people to discuss the potential prospects of the live sessions becoming face to face events. During a meeting I attended that discussed the effects of COVID-19 on the creative industry, I met Catherine Johnson from the Craven District Council. During the meeting, we were asked to discuss potential solutions to issues within the creative industry – this is when I brought up the idea of bringing shared working spaces to Skipton. Although they seem pretty common within more urban areas, there aren’t anywhere within the Skipton area and I believe that they would be hugely beneficial in terms of boosting mental health and creativity in freelancers. Catherine agreed, mentioned that this is already something she’s been looking into and gave me her direct contact details to discuss this further after the meeting. When reaching out to her, I explained my Joy in Numbers project and how this too is something I want to use to bring people together within the Skipton area.

Catherine was full of new ideas and potential routes that I could take the Joy in Numbers project – seeing as she is from the Council she was also able to offer solid guidance on how to gain further funding too! I’ve since set up a meeting between myself, Catherine and the rest of the FP team to discuss these options further.

Regarding our current budget situation, I’ve been liaising with Manon from GPLD to try and get the budget they had already set aside for us moved across to the FP bank account. Seeing as we’re boosting the marketing posters for each live session, it makes more sense for the funding to already be within our bank account so we can pay for it directly from there rather than one of us paying for it and getting it reimbursed at a later date. 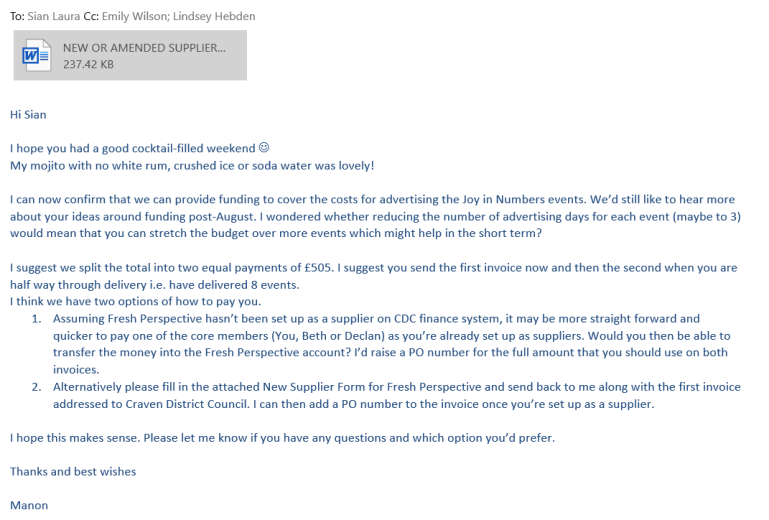